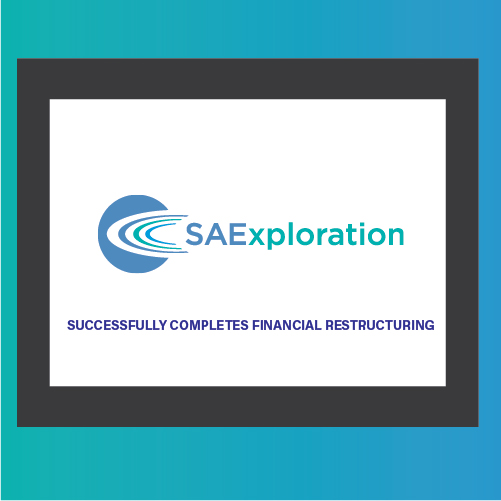 HOUSTON, Dec. 21, 2020 (GLOBE NEWSWIRE) — SAExploration Holdings, Inc. (“SAE” or the
“Company”) announced today that it has successfully completed its financial restructuring and emerged from
Chapter 11 as a private, non-SEC reporting company. As a result of its plan of reorganization, which received
broad support from its creditors, the Company has reduced its debt by approximately $74 million, net, thus
positioning the Company for future growth. During the course of its restructuring, SAE continued to maintain
global business as usual, preserving its strong relationships with its customers, vendors and employees for the
Company’s future.

“We are very pleased to have completed this efficient and consensual reorganization, and we look forward to
working with our stakeholders and newly-appointed board members as a private company,” said Michael J.
Faust, CEO. “I would like to thank our customers, vendors, and our employees whose dedication, patience and
hard work have been exceptional throughout. Our significantly improved balance sheet and increased capital
will put us in an excellent position to compete, while providing the highest quality of service. Our focus on
safety and environmental stewardship will remain at the forefront of our business.”
A Special Committee of the Company’s Board of Directors that was formed in August 2019 to oversee an
internal investigation with respect to the previously disclosed SEC investigation of the Company was dissolved
on December 7, 2020.

Last month, the Company entered into a consent agreement with the SEC that resolves all allegations
pertaining to the Company with respect to the charges filed by the SEC in October. The joint motion filed by
the SEC and SAE in support of the consent agreement notes SAE’s cooperation, remediation and internal
investigation, and that:

• There is no allegation of continuing or ongoing misconduct by SAE
• Former SAE executives hid their fraud from the Board
• SAE has removed the former executives who were responsible for the misconduct
• SAE has implemented enhancements to its internal policies and procedures, including the addition of a
Chief Compliance Officer.

Pursuant the consent agreement, without admitting or denying the allegations in the SEC complaint, the
Company consented to the entry of a final judgment that permanently enjoins it from violating the sections of
the federal securities laws listed in the SEC complaint, but that does not impose any monetary penalty on the
Company. The final judgment was entered by the court on December 18, 2020.

New Board of Directors

The Company also announced its new Board of Directors, comprised of the following individuals:
• Kenneth M. Tubman, President of PPA Resources, will serve as Chairman of the Board of Directors
• Peter W. Cramer, Founder and Managing Partner of the Pc Advisory Group
• Marc Rowland, Founder and Senior Managing Director of IOG Capital, LP will serve as Audit Committee
Chairman
• Zaki Selim, former President, Middle East & Asia, Schlumberger
• Michael J. Faust, President and CEO of the Company